Gratitude Miracles ... the 5-minute journal that could change everything! is organized into 13 4-week cycles to give you plenty of time to maximize the results of the practice.

Each cycle begins with a short snippet about the featured benefit of that cycle. This is the snippet for Cycle 7: Wonder.

One of the most popular gratitude quotes comes from G. K. Chesterton (shown on Week 2). One of his that is not as well known, but is equally great is:


“You say grace before meals.

Obviously he steeped himself in gratitude.

Gratitude Miracles, the 5-minute journal that could change everything! is available at amazon.com. Click Here.
Posted by Joyce Wycoff at 5:24 PM

Why You NEED to Keep a Gratitude Journal

A Dozen Reasons Why You NEED to Keep a Gratitude Journal

If you’re not keeping a gratitude journal yet, maybe these snippets from scientists and leading thinkers and publications will jump s... 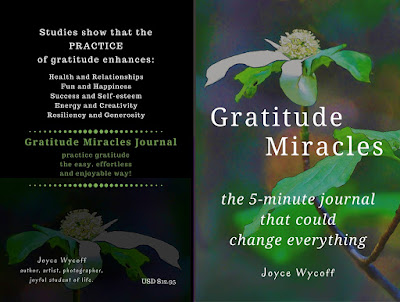